China has named its first independent interplanetary mission “Tianwen-1”, with the combined Mars orbiter and rover spacecraft apparently proceeding towards launch in July....

China has named its first independent interplanetary mission “Tianwen-1”, with the combined Mars orbiter and rover spacecraft apparently proceeding towards launch in July. The name and mission logo were unveiled at a China National Space Administration online ceremony to mark the 50th anniversary of the launch of the country’s first satellite. China is understood to be planning a Mars sample return mission, a Jupiter orbiter and considering possible missions to icy giants and interstellar space. A joint near-Earth asteroid sample return and comet rendezvous mission has also been proposed.

Few details of the Tianwen-1 mission have been released so far. The Tianwen-1 spacecraft is expected to have a wet mass of around 5 metric tons. The spacecraft has apparently been delivered to Wenchang Satellite Launch Center. Following that mission, the Yuanwang-21 and -22 cargo vessels will collect the components of the Long March 5 for Tianwen-1 from Tianjin, north China, for delivery to Wenchang on the southern island of Hainan.

The roughly 240-kilogram solar-powered rover is nearly twice the mass of China’s Yutu lunar rovers. The rover has a mission design lifetime of three Earth months.China has outlined two landing areas, with a candidate landing site in Utopia Planitia.Site selection was driven by a range of factors including flight system engineering constraints and the challenges of entry, descent and landing on the Red Planet, and the science goals of the mission.

The Tianwen-1 spacecraft is expected to reach Mars around February 2021. There are suggestions that the landing segment of the mission will be conducted months later, in April. The Tianwen-1 mission will join NASA’s Perseverance Mars 2020 rover and the United Arab Emirates’ Hope Mars orbiter, which this week shipped to its launch site in Japan, in launching during the July-August Mars launch window. 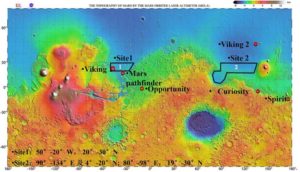